About three years ago, an impoverished community in Nicaragua was touched for the first time by Feed My Starving Children’s food program. The squatter’s community consisted of displaced families who set up black plastic bags for shelter in an area where there was no discernible sanitation system. Heavy plastic bags sheltered the families from the severe wind and rain, but also became sweltering and dangerous homes when cooking was done indoors.

There outside of Jalapa, Nicaragua, a humble church, which included community leaders, started to reach out to children who lived in these desperate conditions. By pooling all their resources, and finding more community leaders to volunteer to help, the church was able to open a small children’s’ feeding center covered by a makeshift shelter in the center of the community. Starting slowly, and with a little help from people from Kids in Crisis and others, the center grew and eventually opened several days a week to serve hungry children who were at risk of malnutrition.

Three years later, this simple food center has grown and flourished! It is now a small church near the squatter’s community. Inside the walls of this new church facility are children singing songs about Jesus, and moms and dads who also listen to the message of hope. This is a place of peace wear all are welcome regardless of religious background and shining example of what can happen when people come together for a common goal.

A recent trip to Nicaragua by representatives of Kids in Crisis, Flutemaker Ministries, a partner of Samaritans International of Nicaragua and Feed My Starving Children, brought a report back of much good news, thanks to nutritional food available to hungry children. According to workers who see the progress of children eating the nutritious rice, soy and veggie mixture, children who were hungry are now thriving. One worker told me within a few months, he notes that new children who were scrawny and hollow-faced now look happier, have more energy and actually have a little meat on their bones! 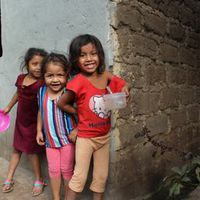