When I visit places like the home that we support and helped build in Somoto, Nicaragua, I am reminded that this structure is not just a big house where 25 children live, it is a refuge, a resource and a center of hope for many. When you first arrive you will notice there is a big gate, walls and barbed wire that surround the property. The protections are not an attempt to keep people in but an attempt to keep unwanted people out.

The house in Nicaragua is about 30 miles from the border of Honduras and there has been human trafficking. People have been stolen and taken across the border and sold into slavery of all types. Most of these people are children. Our children are watched by an armed security guard at night time. Despite all the security, this place radiates life. I am always greeted, not as a visitor, but as a part of the family, and I’ve never left this place without a big smile on my face and a fire in my belly to support all the amazing things that they are doing to impact and change their nation.

About two years ago I received an email from Carlos, the executive director of the Heart of Love Foundation (our partners) stating that there was a 12-year-old boy that they had found. He was living with his abusive uncle, as his mother had died of cancer. To escape the abuse he was seeking refuge on the streets and in church’s. Carlos shared his story and asked for approval to take him in, as extra expense would be involved. We said yes and that we would help financially in whatever way we could. 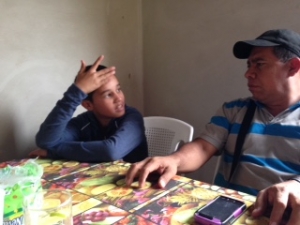 Carlos had a connection to Ricky and saw some of himself in this young man. Carlos knows what it’s like to live in a house with a father figure who is abusive. Carlos grew up with a father who was very violent and abusive, not only to himself but to his brothers, sisters and mother. Carlos and Ricky became very close over the two years and I know this relationship had a big impact on Ricky’s life. Ricky had found a place where he was safe, loved and accepted, had nutritious food and was able to attend school without the fear of always having to protect himself.

When Ricky was born, his father abandoned him and his mother. Recently the 12-year-old’s father found out about the whereabouts of his son. The father decided he wanted to take responsibility and be a father again. Ricky has now left the children’s home, which had become a safe place, to live with his father and have the chance to get to know him.

Before Ricky left we had a meal together to say goodbye. Carlos and Ricky were sitting next to each other. It was Ricky’s last meal with Carlos and the others that had become his family. Carlos asked Ricky to stand up and sing us a song; we all sat there and listened with heavy hearts, knowing that this young man was leaving this safe place, to rejoin his father whom he did not know. As he was singing we noticed that Ricky had a smile on his face and a joy in his heart that was not always there. It gave us confidence that whatever comes his way in life, he would always remember the time he spent with his new family and a man named Carlos, a man who has many titles…war veteran, pastor, executive director, but most of all papa. Carlos is not a man who shows his emotions readily, but on that day there were tears in his eyes as he hugged this young man and watched him leave.

Sometimes our mission only allows us to be a part of child’s life for a brief time. But during that time we are planting the seeds of restoration, reconciliation and love, providing a safe place, and believing one day to see a child who has been restored, reconciled and loved.

(name of child has been changed to protect his identity)